Avalon Guitars, Based in Newtownards, County Down, Northern Ireland.

Tucked away under the hat of Scrabo Tower in Newtownards, County Down stands an Irish Jewel in the art of Hand-Crafted Guitars, Introducing Avalon Guitars.

The Company, Avalon Guitars Limited, was originally formed in 1989 as The Lowden Guitar Company Limited and operated from Bangor, County Down until 1990. Between the years of 1989 to 2003 they produced a whopping 15,000 guitars!

Avalon Workshops (based in Newtownards) were built to faciliate the traditional approach to luthiery adopted by Avalon (then Lowden Guitars).  The facility was laid out in a pattern of specialised Japanese guitar makers thanks to the Japanese technical manager / luthier Mitsuhiro Uchida.

In the late 1980s Mitsuhiro Uchida moved to Ireland to work for George Lowden. Uchida was trained in classical guitar building but had a growing Interest for steel strings, his talent impressed George Lowden that much that shortly after his arrival, Lowden offered Uchida the factory manager’s position at Lowden Guitar Company.

During these years Uchida trained many apprentice luthiers, several went on to develop their own guitar designs which later contributed to the development of Avalon Guitars. Due to limitations in the design licence agreement relating to Lowden Guitars, none of the company’s luthiers were permitted to contribute and develop their design ideas to the company’s product range.  The Lowden Guitar Company created the Avalon Guitars brand in 2000 and invited the design input from the group of skilled experienced guitar makers working for the company at that time.

Avalon is now the leading maker of premium custom guitars in the UK & Ireland blending innovation in design with finest materials and uncompromising tradition. Avalon contributes to the Acoustic world with their passion for acoustic guitar design, quality and most important, tone.  Their products consist of the following: Master Series, Premier Series, Legacy Series, Luthier’s Exclusive and Signature Series.

Avalon Guitars are globally played by some of the most Famous Artists and Musicians in the music business. These names include Jake Burns, Jim Corr, Bob Geldof, David Gray, David Holmes, James Morrison, Katie Melua, Van Morrison, Sinead ‘O Connor and Bruce Springsteen. Watch Katie Melua (below) play an Avalon guitar in her live performance of song ‘Better Than a Dream‘:

Every year hundreds of visitors far and wide visit Avalon Guitars to see the workshop and showroom. A few years ago Me and my mate Dave rang Avalon to see if it was possible to get a guided tour around the workshop which was fine. The Avalon tour is a fascinating insight for music enthusiasts, musicians, craftsmen and luthiers.  It is well worth a visit. We also learnt that Bob Dylan visited the same premises many years ago. A special thanks to Jim Black for the guided tour and also to Halls.  Have a look at some of our photos:

Japanese Carving Knife (Crafting and Trimming the neck) This action is done by hand. 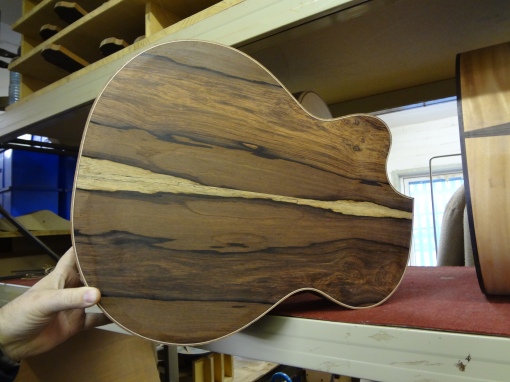 The Back Body of an Avalon Guitar.

This Machine is used to sculpture the Radius. 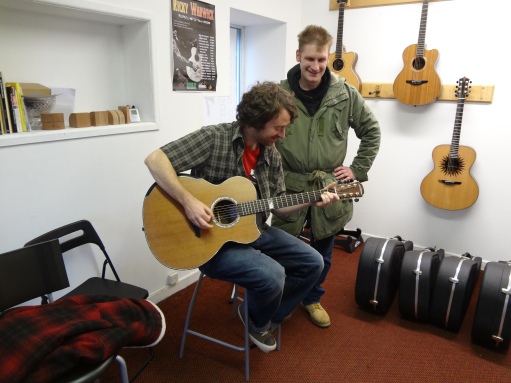 We did and Avalon sound real great! 🙂